Every month, we shine the light on a book from our collection – one which is new to the library, which has been particularly enjoyed by a borrower, recommended by a volunteer, or which seems salient to the month’s events or happenings. To see the archive of past books of the month (formerly book of the week), click here.

The current book of the month is…

March: After the Formalities by Anthony Anaxagorou 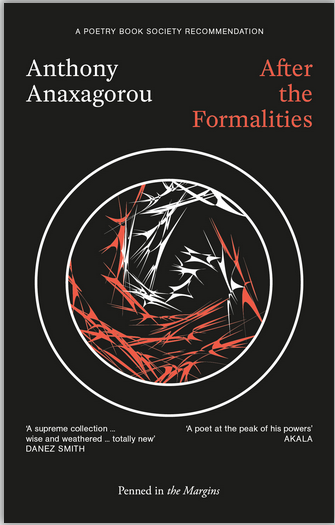 In this age of globalization, migration, refugee crisis, Brexit, and an increasingly mobile population, it is a luxury to feel like you belong somewhere. This is the theme that pervades Anthony Anaxagorou’s After the Formalities. Anaxagorou is of British and Cypriot heritage, and the collection insistently calls out the perceived otherness of having a background of multiple nationalities. The formalities of the collection’s title here are the politenesses, the performance of social graces, before being hit with what the real line of inquiry is: where are you from really.

Poems like ‘A Line of Simple Inquiry’ trace the experience which is all too familiar for anyone who might be perceived as being from somewhere else: the scrutiny and “taxonomy of difference, along with the need or entitlement to ask so politely”, the fussy side-stepping and hedging of “your people, as in extraordinary, as in don’t take this the wrong way, as in don’t take this to heart, but it’s all so fascinating”. More appallingly, ‘Uber’ recounts an encounter where the speaker’s Mauritian cab-driver is verbally harassed by two men on the day of the EU referendum in 2016.

This is the potency of language: to hurt, to be violent, to ostracize, to alienate. And Anaxagorou’s poetry is a counter-attack with deftly controlled short lines, verb-fronted sentences, brutally incisive observations. This is a poet who knows the strength words can have. In his elegy to his dying grandmother, ‘Biographer’, Anaxagorou describes how she “taught me to write. to sip sound. use language for closeness. for closure.” Just as importantly, though, he is aware of where language falls so very short. The collection is arguably at its strongest when allowing for this space in language. In ‘Things Already Lost’, Anaxagorou’s son is curious about “where water ends when it / disappears along with dirt” in the bath, whether the trail a snail makes “is a thing / it makes or it leaves”. There are no answers to these questions, reflected in the wordlessness of the poem’s last line: “when a motorcycle is down / most of us will stand one of us kneels / nobody’s sure where to touch”. Even in its silence, Anaxagorou’s poetry is strong, balancing always on the edge of what is said, what is unsaid, and the power of both of those things.